Art is the opposite of nature. A work of art comes from the inner soul of a human being. Art is the picture’s form brought into being through human nerves – heart – brain – eye. – Munch

The past year in Australia has given me the time to not only undertake the essential research into corvids, but to work out what technology I needed to undertake the production before dragging it to the other side of the world.

How I’ve used that technology – the cameras and sound recording equipment – has come from my reading, questioning of the experts and personal observations. My academic sounding boards have been Brisbane-based behavioural ecologist, Professor Darryl Jones, regarding the ability of crows to adapt to an environment and Professor Graham Martin, a UK based ornathologist who has written a comprehensive text on the sensory worlds of birds. Assisting me to get prepared for life in Iceland was environmental anthropologist, Dr Georgette Leah Burns, who specialises in human interactions with nature. She’d spent time in Iceland and gave me a hand finding the right bird specialist to communicate with, as well as what kind of socks and coat to take with me.

There’s a lot of information to take on board, evaluate, and interpret before it can inform the art-making process.

The following quote from Edvard Munch seen in a museum in Oslo struck a chord: Art is the opposite of nature. A work of art comes from the inner soul of a human being. Art is the picture’s form brought into being through human nerves – heart – brain – eye.

It made me start to think I’d been trying too hard to represent the landscape from the raven or crow’s perspective – using my research findings too literally. This project does, after all, include cultural research as well as scientific research, and can be just as complex. I’ll explore this a bit more later on, but while I continue to observe and talk to people about ravens in Iceland, I need to start bringing my creative eye to the presentation of the work as I quickly enter the production and post-production phases here.

So where the bloody hell are these birds?

While in Australia, I had been struggling to find someone or anyone in Iceland to help me with local knowledge of raven populations in the country. Eventually, one of many emails was responded to and a contact at the Icelandic Institute of Natural History (where the raven is their emblem) offered a little more insight into my online research, that seemed to indicate that despite the cultural significance of the birds to Icelanders, they were under threat. Thanks to the Institute’s head of zoology and wildlife ecologist, Kristinn Haukur Skarphéðinsson for the following information.

The raven decline in Iceland is probably both due to persecution and change in food supply. They are, however, still rather common in late summer and autumn and found throughout the lowlands in Iceland as well as some birds in the highlands. Concentrations are usually found near rubbish tips, the largest aggregation being in mid-winter, e.g. 700+ birds came to a single roost this past January. The big roost was in Ingólfsfjall mountain near Selfoss, Southern Iceland. It has been known as a roost for a long time and is frequented by birds from the Southern lowlands, ranging up to 30 km from the roost at least. There are many similar historical roosts in Iceland, e.g. two being in the vicinity of Reykjavík. (A shame I’m based in the north!)

As I mentioned though, part of my research process has been personal observation. I was expecting to see ravens right across Scandinavia in my month of travel before arriving at the residency. The Icelandic raven is Corvus corax, the common raven or northern raven, found across the northern hemisphere. While I did see hooded crows, jackdaws and magpies (not Australian magpies) – all of them corvids – I didn’t see my first raven until I was in a museum in Malmö…and it was taxidermied. It was part of an exhibition titled People Love Birds = True? Strangely, the Corvus corax referenced in this exhibition was in context with Irish mythology, where it’s associated with war and battlefields. When hero Cú Chulainn died, the goddess Morrigan appeared on his shoulder in the form of a raven. This is a bizarre context for a Swedish exhibition given the Viking origins of the country, and the ravens significance to that culture and Norse mythology. 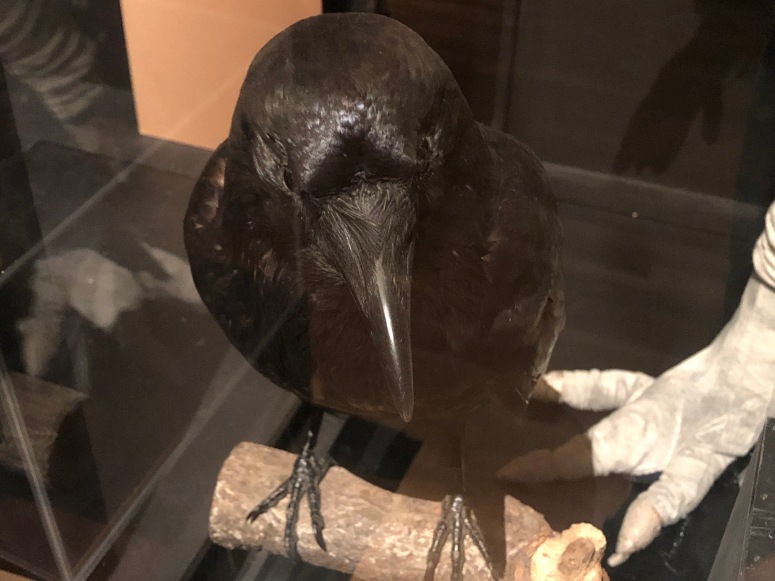 Travelling through the remainder of Sweden and Norway, albeit mostly through city areas despite the odd day trip into the countryside, I didn’t see another raven until arriving in Reykjavik, Iceland. Interestingly, other corvids do visit Iceland but few breed here.

Ravens have been very much part of Norse mythology. Their presence is documented everywhere in Iceland, including the story of settlement. Flóki Vilgerðarson sailed to search for the island in the late 860s, bringing ravens with him, and releasing them as he sailed. One flew up into the air and didn’t return to the ship. He followed it to the new land that would come to be called Iceland. The Norse God Oðinn (Odin) was often called Hrafnaguð, meaning the Raven God. Óðinn had sacrificed an eye for wisdom, relying on two ravens, Huginn (thought) and Muninn (memory/mind), as messengers who kept him informed of all that happened across the world.

Today, artists use Icelandic ravens as subject matter in street art (see below), and tourists are treated to the stories of the raven’s significance to Iceland…while the locals continue to cull the birds (except perhaps in the Westfjords). A report published in 1990 based on research done on the biology, movements and persecution of ravens in Iceland by Skarphéðinsson and others stated: Indiscriminate killing of ravens usually occurs at garbage dumps, staging areas, roosts, and where ravens concentrate around at locally abundant food. In addition, eider farmers began using stupefying drugs (mainly phenobarbitatum) in 1969; as a result many of them claim they are now more effective at killing ravens than when they only used firearms and strychnine. This level of persecution is unprecedented in Iceland and represents a dramatic increase in the number of raven killings.

This site uses Akismet to reduce spam. Learn how your comment data is processed.