I’ve been working with sound since I was a journalism student in 1991. I went on to work in radio, in the days when ABC studios were still analogue. I recorded on a reel to reel recorder, and could cut and splice tape with my eyes shut. We did some pretty fancy mixes at times with tape.

Digital sound even more more opportunities to be creative with the mix. More options mean more decisions. Like the search for the right camera kit for Eye of the Corvus, putting together an efficient, creative sound kit has been important. It’s by no means a secondary element of the work, even though it’s being developed quite separately to the vision. 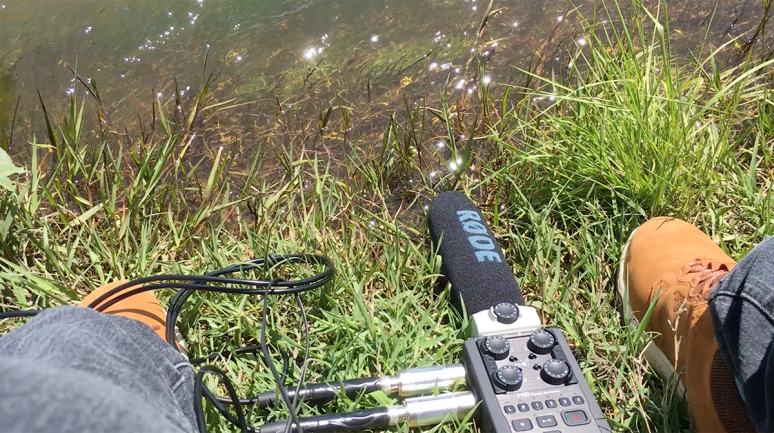 I’d had the pleasure of working with a Zoom H6 Handy Recorder over the past couple of years, using it to not only produce experimental soundscapes but to record voice tracks for video interviews. Having tried various other audio recorders in the past, the Zoom H6 is not only easy to handle, it can hotshoe to to top of a camera or be mounted separately on a tripod for interview scenarios, when I’m director, sound recordist, camera operator and interviewer all rolled into one. It also allows for a range of mics to be put to work via four interchangeable input capsules – X/Y, MS, Shotgun, and four XLR inputs – as well as offering a back-up recording.

The only other recorders I’d been eyeing off online were the pocket-sized Zoom H2n 2-4-channel recorder (with 5 built-in mics), and the new Zoom H3-VR virtual reality recorder, with future projects in mind. I was lucky to score the H2n for Christmas.

Quality and creativity is with the mics

A bit like lenses on cameras, it’s the microphones that really do the fancy stuff. I’ve spent a few years now building up a basic collection and I’m now starting to add microphones that will allow me to experiment further, like the hydrophones and contact mics.

The lav mics were the last purchase as the DPA 4060 stereo kit I’d ideally have liked was just a bit too pricey for the project budget. The only other mic I’d love to have at this stage is a stereo parabolic mic set-up (such as Telinga)…a little harder to transport when you’re trying to keep a lid on the baggage allowances for overseas travel.

Putting them to work across western NSW over several months has sorted out what’s working so I’m only taking the essentials to Iceland.

You can hear some of my sound works incorporating field recordings with the Zoom H6 on my other website. The Sounds of Summer series were mixed from recordings done with a range of mics hooked up to the H6.

This site uses Akismet to reduce spam. Learn how your comment data is processed.